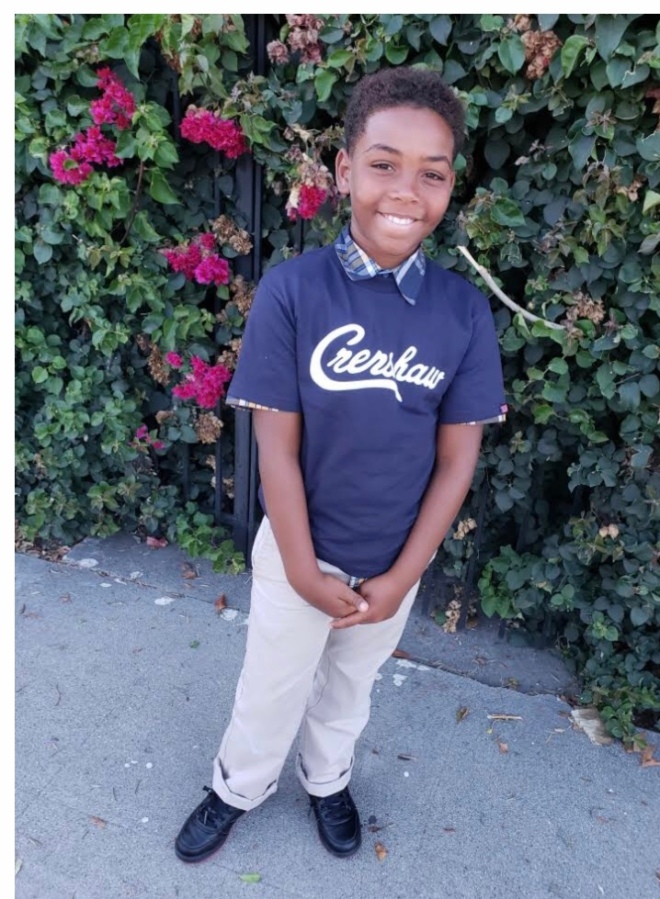 Navonne Love represents joy, a passion for his craft, and ambition. He’s already making his mark in Hollywood as an actor, singer, and dancer — all at the age of 10. Love has a great sense of humor and is wise beyond his years as well. Navonne knows what he wants and has no plans of stopping. We loved interviewing him not just because he’s a kid, but he’s so positive and ready to take on the next challenge with love and focused intent.

Navonne, a Chicago Native and now living in L.A., started acting classes when he was four, and he has always known that he wanted to be an actor. Love also dances and sings. His 5th-grade schedule is hectic with auditioning, school, plays, and soccer, yet he’s not tired because he is doing what he is passionate about. Recently, his first national commercial aired on ESPN that features Navonne as an athlete that retires as a kid. It’s part of the #DontRetireKid campaign that is encouraging kids to play for fun (versus such a competitive level). The message is subtle but powerful and sends an essential lesson to parents. Produced by the nonprofit organization, Project Play (https://www.aspenprojectplay.org/whatwedo), the commercial encourages kids to stay in sports, and most importantly; for the love of the game. Launched in 2013 by the Aspen Institute Sports & Society Program, the initiative develops, applies and shares the knowledge that helps build healthy communities through sports. Project Play produces reports that take a measure of the state of play at the national, regional and city levels, with exclusive data and insights.

When Navonne took time out from his busy schedule, he chatted with us after school about his acting aspirations at Delicious Pizza in Los Angeles.

How long have you been acting?
Well, I’ve been acting since I was four. I took classes until the age of five. I’m pretty good at memorization, so that helps. When I read my first script, I knew that I had the bug. Currently, I mainly work with a scene study partner, and we always run lines together. I try not to overstudy because acting should come naturally on an individual level.

You also are a great dancer. Tell me about your choreographer?
I love to sing, dance, and participate in a lot of school productions. I taught myself how to dance by watching Michael Jackson. John Silver, my choreographer, is fantastic. He’s such a great teacher and dancer. Typically, I will have something down within about half-an-hour after he has taught me.

What was it like filming #DontRetireKid in New York? It’s such an important message. Also, what sports do you play?
Super exciting! There were cameras everywhere, and we filmed in NYC. It’s also cool that the message is important too. The filming was amazing with cameras at every angle. It was about 8 hours, which was not that long for me when I am doing something I love. It was in New York, which was fun as it was my first time there. For sports, I play soccer, flag football, and handball — but just for fun. My parents do not pressure me.

What actors do you admire?
The late Cameron Boyce and Dwayne (The Rock) Johnson inspire me. Cameron Boyce’s character (Carlos) on Jessie inspired me to become an actor when I was five-years-old. When he passed away, I cried for two days.

Why do you like acting so much?
I like being able to express my feelings through different characters.

How do your parents assist you in supporting your dream?
My parents support my dream in every way by providing me with the opportunities to get better and taking me wherever I need to be for an audition or a job. Also, sometimes I rehearse lines with my dad, but I let him know when I have it down.

If you could be a Superhero, who would it be and why?

I chose three! Black Panther, Spiderman, and Ironman because they risk a lot. Black Panther almost died for Wakanda; Spiderman saved his friends from falling and almost died. Ironman died but kept all of humankind on the earth.

What is coming up?

I’m super excited about my tracphone commercial for Walmart. It will be out late September or October. I can’t wait!

We will be watching Navonne Love and all his acting aspirations. He’s on the rise and we could not be more thrilled for him! To follow him on Instagram: @navonnelove

New Busy Beauty customers get 10% off their first order with code SAVE10.